Skip to content
Home » First Ride: Is the Royal Enfield HNTR 350 a low-cost motorcycle for all occasions?
Automotive

First Ride: Is the Royal Enfield HNTR 350 a low-cost motorcycle for all occasions? 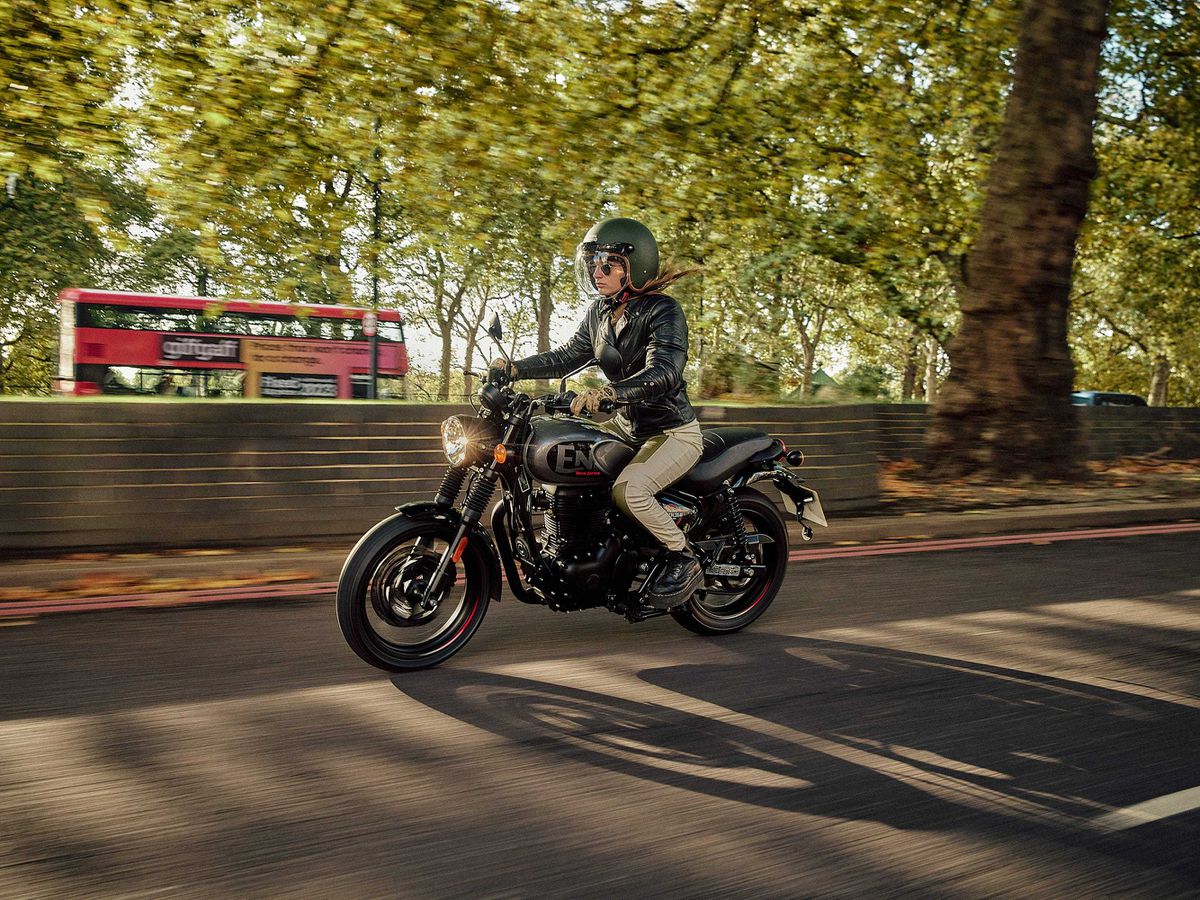 >
Royal Enfield is a company on a bit of a mission. It has quickly injected its range with some real excitement, with models like the Himalayan showing that this brand can produce clever and attractive motorcycles that arrive with a price tag that is a fraction of competitors.

The HNTR 350 is one of its newest additions. Hoping to tap into the flourishing retro-inspired category, it’s a bike with ease-of-use at its very core. But as well as those eye-catching looks, is it a bike with something else to offer beyond visuals alone? We’ve been finding out.

>
The HNTR might use the same 350cc engine as you’ll find in Enfield’s Meteor and Classic motorcycles, but this bike has a far more retro-inspired look and feel. It’s why it’s got that classic one-piece seat and high-riser bars which give a more laid-back, easy riding position. It’s been built with commuting and urban environments in mind, which is why it has a shorter wheelbase than the other 350cc-powered bikes in the Enfield range, for added manoeuvrability.

It’s worth mentioning that the HNTR also has something seriously impressive up its sleeve – value. At £3,899, it’s more akin to the price of a regular 125cc learner motorcycle, and the Royal Enfield has a lot more performance and usability than those.

>
At the heart of the HNTR is a 349cc air-cooled single engine, which pushes out a modest 20.2bhp and 27Nm of torque, driven through a five-speed gearbox. Royal Enfield claims that its top speed is just over 70mph, so you’re not going to feel too out of place if you’ve got to head onto the motorway or dual carriageway from time to time.

Royal Enfield claims that the HNTR should return just over 100mpg, too, making it a great option for riders after really good fuel efficiency. You get disc brakes at front and rear, too, alongside dual-channel ABS for added security.

>
The Royal Enfield HNTR 350 is very user-friendly right from the beginning. The seat height is pretty low, so even average-height riders will be able to get their feet flat on the floor. Spark the single-engine into life with the analogue starter controls and you’re met with a really classic sound – this bike sounds excellent, even at idle.

Away from a stop and the HNRT pulls strongly, delivering much more acceleration than you might expect. The gearshift is light and easy, while the handling feels nimble enough to make country lanes good fun. The suspension is definitely on the softer side of things – as are the brakes – but this promotes you to take a slightly more sedate approach rather than racing between the lights. It’s great around town, too, and though it does feel a bit stretched on the motorway, it can handle shorter jaunts at the national speed limit.

>
The HNTR 350 has definitely been designed to attract the eye. The prominent appearance of the tank is really great – to our eyes, at least – and there are a number of colours to choose from, ranging from ‘Dapper White’ to ‘Rebel Red’. You’ll pay £80 to upgrade to some colours, but that still seems pretty decent value.

The black frame and exhaust system contrast this nicely, too, while it all tapers into a neat rear-end design with its LED light. In fact, that black anodised finish is applied on much of the bike’s mechanical components and this helps to give it a far more premium appearance.

>
The HNTR 350 has a pretty low price, so you can’t weigh in expecting the very latest in technology. You do, however, get some LCD displays which can show you which gear you’re in alongside some basic trip computer functions. It’d be nice if you could display your speed there too, but thankfully the main circular speedometer is clear enough.

Though you do get an LED light at the rear of the bike, it’s a regular halogen version up front. Despite this, it provides a decent amount of illumination at night, while the high-beam setting is good for when you want more visibility. The indicators are nice and bright, too, though the switch which controls them feels a little bit soft and imprecise.

The HNTR 350 feels like a great example of how you don’t need to trade off on riding fun in order to get a low cost. In fact, in today’s climate of high living costs, it makes for a very appealing way of getting around without breaking the bank.

But on top of that, this a motorcycle which doesn’t take itself too seriously, instead providing good performance, excellent fuel economy and a really characterful engine note wrapped up in one good-looking design.

Long-term report: The electric adventure ends as the Cupra Born departs the fleet